Home/Latest News/Snows are Coming
Previous Next 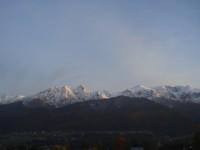 Yes that’s right- It’s only October but the snows are coming. This photo was taken by myself just 4 days ago. It is worth noting that it has since rained and the mountain does not look quite so picture-postcard right now 🙂

However, this does not negate the fact that the snow has arrived early this year and the prophetic “old men” of Zakopane have predicted a snow-heavy ski season this winter. Now they aren’t the BBC of course but they have been fairly accurate in the last 3 seasons that I’ve been hearing their predictions.

This does not mean that there wont be a crazy bout of unpredictable global-warming to ruin our party for sure but this little news snippet will keep you up to date as the ski season draws nearer and we will bring you the truth about the weather and the snow cover as it happens.

Fingers crossed for more early, and then normal time and then late snow this season!