Day1: Nairobi – Tsavo West
Depart Nairobi at 0700 hrs and proceed to West National Park. Visit the Chyulu Hills and the Mzima Springs, which are favorite haunts of both the hippo and crocodile that can be seen from an underwater observation chamber. Dinner and overnight at the Chyulu gate campsite

This park was famed for its large herds of elephant covered in red dust and fine scenery. We visit the scenic Lugards Falls, Mudanda Rocks (attracts elephants in the drier season) and Aruba Dam

Day 3: Tsavo West – Amboseli National Park
Morning game drives then proceed to Amboseli National park we view game as we proceed towards the campsite for dinner and overnight. Amboseli Park (at 392 sq km) is the second most popular park in Kenya after Masai Mara, mainly due to the spectacular backdrop of Mt. Kilimanjaro on the southern boundary

Day 4 : Amboseli National Park
Today you will spend the full day in Amboseli with early morning and evening game drives. Whilst in the park, you will have the opportunity to photograph the animals against the wonderful backdrop of Mount Kilimanjaro. All meals and overnight at a campsite

Amboseli National park is one of the most popular wildlife sanctuaries in Kenya. It is situated close to Kenya. It is situated close to Kenya- Tanzania border, The Park lies at the foot of Mt. Kilimanjaro, the highest mountain in Africa (5,896m) whose snow-capped summit presents a splendid view on clear days. Amboseli National Park is often referred to as “The home of Elephants’ some of the largest Elephant herds are found here. The Game Park also contains vast groups of Zebras, Wildebeests, Giraffes, Buffalos, Hippos and Antelopes. Also to be found in Amboseli are lions, leopards, Cheetahs, Rhinos and many species of plain game. 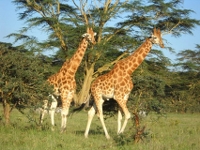 The private ranch at Sweetwater’s is the only sanctuary for rehabilitation in Kenya of these widely abused chimpanzees with two groups living in an environment as close to their natural habitat as possible. The site is also a dedicated black rhino breeding area.

Day 6 : Mt. Kenya- Samburu Game reserve
Depart for Samburu soon after breakfast game is viewed as we proceed to the campsite for lunch. We camp in the narrow stretch of palms and woodland by the Ewaso Nyiro River which provides water for the animals and some relief from the equatorial sun.

The highlights of Samburu game reserve is the spectacular scenic beauty, rivers and forests. It is an area where the local people have a rich and colorful heritage. The reserves have numerous permanent springs and a wealth of wildlife which includes leopard, hippo, elephant, lion, reticulated giraffe, grevy’s zebra and crocodile in the Ewaso Nyiro river. Over 365 species of birds have been identified in the sanctuaries

Lake Nakuru is a shallow alkaline lake on the edges of Nakuru town and lies a distance of 160 kilometers from Nairobi. The lake is world famous as home to millions of flamingoes. The number of flamingoes depends on the water level which determines the quantity of algae on which the birds feed. Flamingoes are known to migrate to other Rift Valley lakes whenever the water level is low. The National Park surrounds the lake and was gazetted to protect the colony of flamingoes as well as provide sanctuary for endangered species such as the rhino. There are about 25 white and black rhinos, one of the largest concentrations in the country. Predators are also residents to this park while Rothschild’s giraffe have been trans-located into the park for safety

Day 9 : Lake Nakuru- Maasai Mara
We break the camp soon after breakfast and travel south through the beautiful savannahs and plains of the Rift Valley and reach our base camp site, where we enjoy another evening out bush under the far-reaching African sky. Game is viewed as we proceed to our campsite for Dinner and overnight stay at Mara Sidai campsite

Day 10/11 : Maasai Mara national park
Spend the next two days on game drives exploring the Masai Mara. The open grasslands are home to incredibly rich and varied wildlife and the awesome, annual migration of millions of wildebeest and antelope is the highlight of any visit to Africa from July to October. Dinner and overnight stay at Mara Sidai campsite

The Maasai Mara Game Reserve is arguably Kenya’s most popular game sanctuary. It is the most famous and most visited game reserve in Kenya. The film ‘Out of Africa’ was made to a great extent in this reserve. Virtually every type of wildlife can be seen at the Mara. A spectacle worth seeing is the annual migration of millions of wildebeest, zebra and gazelle from Serengeti plains across the Tanzania border and the Mara River to reach Maasai Mara grazing fields from late June. The dramatic crossing of the river and the preying on the migrants by predators can be viewed from early July to August. The reserve abounds with birdlife since dose to about 452 species have been recorded. Hot air balloon safaris are readily available in this park

Day 12 : Mara – Nairobi
Morning game drives then proceed to Nairobi to arrive by 1600 hrs where the safari ends, Drop Off at the airport.

What Is Not Included:

* All prices are subject to change (especially due to currency fluctuations and desired travel period). All tours are quoted on request. The quoted prices we send will not change.