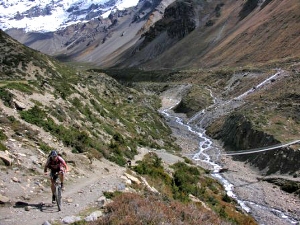 Day 01: Thamel to AAA Farm via Bungamati and Lele (35km with no significant altitude gain.)

Day 07: Dhulikhel to Sisneri via Panauti/Drive to Kathmandu (45km with 300m ascent and descent)

Day 01: Thamel to AAA Farm via Bungamati and Lele (35km with no significant altitude gain.) After breakfast, hopefully with a clear view of the Ganesh and Langtang Himals, we descend and cross-over the Bagmati River by swing footbridge?Watch your balance! We carry our bikes uphill for a short distance to reach the picturesque villages of Khokana and Bungamati. Get ready to enter the fourteenth century! In many temples in these villages ancient rituals are still practiced. The Shekali Mai, nature valley goddess, temple in Khokana is one temple we will visit. We shall be praying for good balance for the roads ahead! In the main square of Bungamati, there are the temples of Macchendranath, the compassionate god of agricultural prosperity who is revered by both Hindus and Buddhists. We then climb southwards on jeep track through forests to the village of Champi and on to the sleepy village of Lele. The steep climb out of Lele will test your stamina as we cut back northwards to a forest ridge. Continuing north the descent to Chapagaon village offers excellent views of Kathmandu Valley. Chapagaon is home to the Vajra Varahi temple, the boar incarnation of Lord Vishnu. Ancient woodland surrounds the temple, protected by the local belief that to cut even one tree would greatly anger the deity. The villagers still appease the wrathful Vishnu by weekly sacrifices of chicken, goat, and buffaloes. After lunch we continue along jeep track to the undulating southern end of the valley, soon reaching the foot of Bishanku Narayan temple. Folklore says the demon Bhasamur was tricked by Lord Vishnu here and was turned into ashes. We ride clockwise round this heavily forested knoll, said by folklore to have been fertilized by Bhasamur’s ashes. Here we bear east on shingle and jeep track to join a tarmac road passing through the village of Lubhu, known for its handmade clothes. Just beyond is our evening’s rustic lodging at ‘Lotus Farm’. This charming Chhetri farmhouse is at least 75 years old and looks it. Well you have to rough it one night right?

Day 02: AAA Farm to Nagarkot (28km with 600m altitude gain) Early morning farm activities awake us and we can enjoy the sunrise views from the terrace. After breakfast, we ride to the medieval town of Bhaktapur. This restored old city is full of temples and courtyards. After spending sometime exploring this ancient city we head northeast on tarmac road passing lush rice fields on the base of Nagarkot where we join a steep jeep track. We climb to a narrow ridge where there is some great single-track riding. The track brings us to the temple complex of Changu Narayan where, in the sixth and seventh centuries, Newari stone masons made beautiful carvings to Lord Vishnu. The stone tablet standing on the West side of the temple is said to be the earliest known inscription in Kathmandu Valley. It depicts King Mahadev’s military conquests in the fifth century. From here we descend the North side of the ridge along a washed our jeep track to the Manohara River. Crossing the river can be tricky depending on the monsoon rains. If you want, give it a try but you’ll likely end up looking a fool pushing your bike ahead of you! We have lunch once reaching the other side of the river, drying out shoes in the sun. We’ll continue north to the village of Sankhu and the Bajra Yogini (a Tantri goddess) temple complex, lined with old water tanks, rest house and a vermilion-powdered and blood adorned triangular stone where animal sacrifices are still made. It is believed that this goddess was the motivating force behind Manjushri, who drained the lake that once filled the Kathmandu Valley. We now climb steeply to the summit of Nagarkot. We lodge for the night on the North side of the hill at the ‘View Point Hotel’.

Day 03: Rest day or off-road to Shivapuri ridge (10km) and Nagarkot summit (10km) If you don’t want to rest, there is optional morning or afternoon rides on this so-called rest day. A three hours morning ride ascends the southern slopes of Shivapuri ridge to the North (Jarsing Pauwa), to soak in sweeping views to the whole valley and Jungle Himal. This ride returns to the guesthouse for lunch. The three hours afternoon ride goes to the Nagarkot tower at the summit (2,165m), for fantastic views of the Himalayas. We ride on paved and jeep road. The choice is yours.

Day 04: Nagarkot to Panchkhal/Sunkosi Adventure Retreat (40km with 900m descent to Panchkhal and 200m altitude gain to Resort) The day begins with an exciting descent along a single track. We pass through several villages and small ancient shrines, with fantastic views of the Himalayas. Soon after the Tamang village of Balwapati we enter a section of trail we call the ‘Mini-Grand Canyon’, which is a narrow two-foot-deep eroded trail. The canyon will test your half-pedaling and track-stand skills, not to mention your balance! Hang in there; it’s only about 30m long. You will also learn the Nepali phrase “raato maato chiplo baato”? red mud, slippery trail. We reach the village of Lamsai, overlooking the Indrawati River, by a demanding single track. From here we join a jeep road that follows the Chok Khola (River), a tributary of the Indrawati, winding our way through a golden sea of rice crops. Soon we reach Panchkhal and the paved, but rarely traveled road to the Tibetan border. One kilometre uphill and we take another spur road to the east. We grunt nine kilometers uphill to the summit of a long ridge, known as Palanchowk to our lodge the Sunkosi Adventure Retreat.

Day 05: Sunkosi Adventure Retreat to Panchkhal (10km with 200m descent), Dhulikhel (27km with 200m altitude gain). From the Sunkosi Adventure Retreat we can enjoy the stunning views of the Gaurishankhar Himal and the mist-choked valleys of the Indrawati and Sunkosi Rivers far below. After breakfast we ride east to the summit of Palanchowk and the famous temple, which shares the same name. From here the only way out is down! We take the express route off the steep southern face on a switch back single track. Be careful on the turns?remember you are not wearing a parachute! Once we reach the valley floor we cut back to the Tibetan highway. The last two kilometers are wrist-numbing cobblestone. Remind yourself?this too shall pass. We then have an 18km uphill ride to Dhulikhel and our lodge for the night.

Day 06: Dhulikhel, Namo Buddha, Dhulikhel After breakfast at the Dhulikhel Lodge, we climb out of Dhulikhel on dirt and tarmac encountering two hills before reaching the Buddhist pilgrimage site of Namo Buddha. According to legend, it was here that Buddha, in a previous incarnation, gave his flesh to a hungry tigress as an offering. A stone statue marks the site, and there is an active monastery. Leaving this hilltop, we plunge into the lush fields below to a small village before contouring our way back uphill to Dhulikhel and our lodge.

Day 07: Dhulikhel to Sisneri via Panauti/Drive to Kathmandu (45km with 300m ascent and descent) We descend on jeep track to the ancient city of Panauti where Lord Buddha lived as a prince prior to his offering to the hungry tigress. This city is truly lost in time and is rarely visited by tourists. The Indresara Mahadev Temple is the oldest surviving dated temple in Nepal, believed to have been built in 1294 AD. Climbing west, we follow a jeep track along the meandering Roshi River. Beyond the town of Madhuban we enter a narrow pristine valley, ascending 300m on a superb single trail to reach the summit of a hill on Kathmandu Valley’s rim. This is probably the oldest route east out of Kathmandu Valley, known as Lakhure Bhanjung. What a grunt, but the views of the Himalayas more than compensate! From here we descend 500m via switch back jeep track to Sinseri, a quiet village. The ethnicity of the people changes as we descend from Tamangs in the hills to Thakuris , Chhetris to valley bottom Newari farmers. A short distance beyond Sisneri is our pickup point for the drive back to Kathmandu. The afternoon will be spent on packing bikes and gear for your return flight. This evening’s hotel accommodation is at Hotel Norbulinkha in the heart of the city. A farewell bash will beheld at the hotel.

Day 08: Transfer to Kathmandu Airport/Departure Two hours prior to departure time you will be transferred to Kathmandu International Airport.